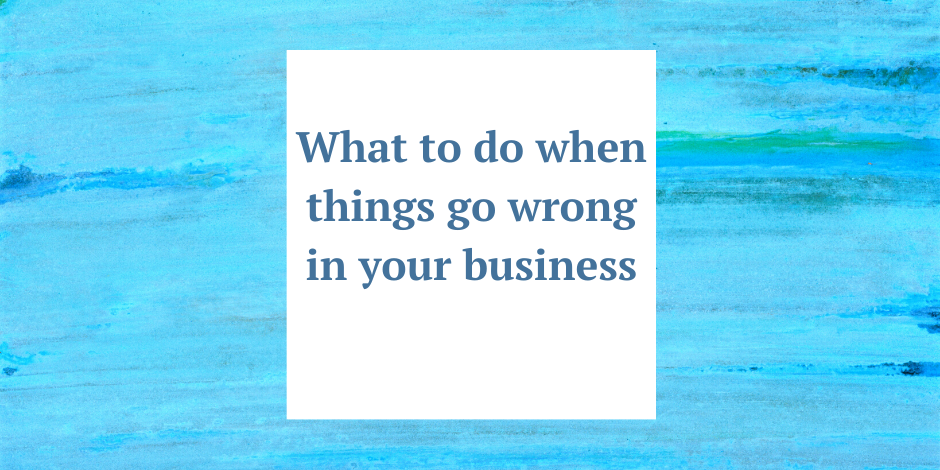 I walked in to the presentation room early.  I was expecting 20 people to show up, so I wanted to make sure everything was in place. I was looking forward to meeting some new folks and working through my content. There were some good leads on the registration list so I reminded myself to be interactive and make sure I got to know them, and they got to know me.

A few minutes before the event, one person walked in. By five past the hour, we had a total of three people in the room. That was it. That was who I was presenting to. Not 20… three.

Things are going to go wrong. It’s bound to happen… You’ve established a goal and a strategy; you put your plan in place, you start taking action – and things don’t work right. People don’t show up; the tech doesn’t work or maybe it changes changes… things that you were counting on are no longer count-on-able.

Put a plan in place and the universe laughs. I get it!

But when things go wrong in your business, it isn’t the end of the world, right? Through the frustration, confusion, and maybe even anger – we know it just means that this particular thing didn’t happen, and you’re going to have to do something else.

You need resilience to run a business. Any business owner learns that early on!

So when things go wrong – what do you do?

What are the actions you take in response to that challenge?

In general, I’ve found that there are two possible responses to when things go wrong.

In the case of the situation described above – which happened to me a few years ago – the answer was to shift my presentation style. I invited the three attendees to sit together; then I pulled up a chair, and we turned the formal event into an informal group coaching session. And you know what? It was awesome! I learned so much about them, and they got to know me. I did ultimately end up converting one of them, and another one showed up at another of my presentations a few weeks later.

This is what I consider to be response #1 when something goes wrong:

Change the plan, not the goal.

If the goal is at the top of a mountain, and your process of reaching it is to climb that mountain, then “something went wrong” is a trail that’s washed out. Do you stop climbing? No, you don’t. You bushwhack around it or you back up a bit, and you find another trail. You keep climbing for that goal.

That’s one response. But there is another.

In the middle of last year, one of my active, long-term 1:1 client relationships ended, and it took me by surprise. I want to say that I’d seen it coming – they were going through some changes and their philosophy had shifted. I admit that I was thinking about ending the relationship myself at some point in the near future, because I was planning to take my business in a new direction. But I thought that would be many months or even a year out. So when they told me, I was taken aback.

But not for long.

Within an hour of learning that we’d be dissolving our relationship, I was seeing the possibilities. This was an opportunity to put my own changes into high-gear. I had some plans that were 6-months or more out, and this would allow me to put them into action almost immediately.

In this case, I used response #2 for when things go wrong:

Ask: What is the opportunity here? What else could I do besides continuing along this path?

So… what do you do when things go wrong?

I believe that each of these options is situational. It depends on what it is that went awry.

I suspect that we each gravitate more towards one option vs the other. I know that I gravitate towards the second one just a bit… and so it’s important that I remember that bailing on the entire plan isn’t always the right option; That sometimes just a few tweaks in the plan will help me get back on track.

What about YOU? Do you tend to go towards option #1 above, or option #2? Let me know in the comments below!