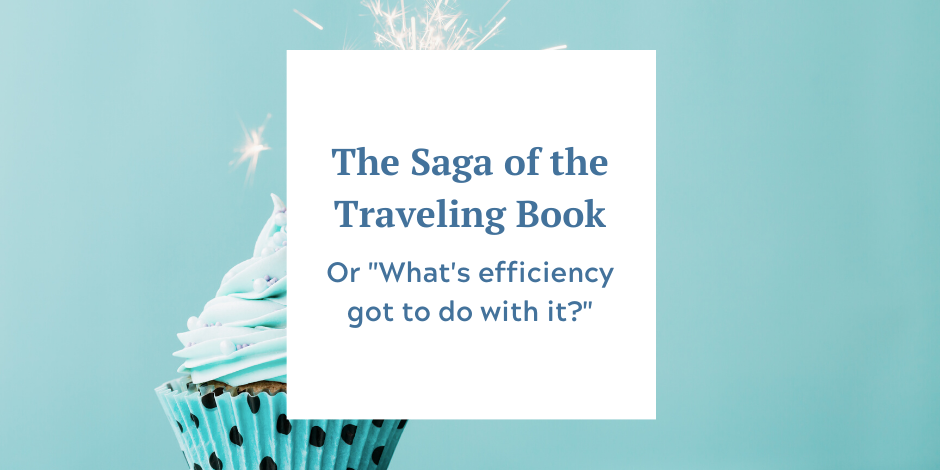 My sister mailed me a pastry cookbook last week. She had an extra and it’s a really good one, so I’m psyched that she sent it my way!

I tracked the book as it made it’s way. Two days after she sent it, it was due to be delivered. According to the tracking, it was in my town and I could expect to see it by mid-afternoon.

I was so excited to get my hands on my new book… but then it went away again. (Whaaaat?!)

As I monitored the tracking number, I watched the book travel to the other side of the state – to a transfer station, presumably – only to turn around and head back to me.

I’m pleased to say that it eventually made it to me safely but wow, it was quite the journey!

As I watched “The Saga of the Traveling Book” unfold, it brought to mind the inefficiencies of my own world – especially in my marketing.

How often do I take the long way around the tree?

How many things do I do as a one-off that could easily be re-purposed, with just a little bit of effort?

How often do I take the time to put a process in place to help create efficiency?

Actually… one of the things I know I’ve gotten more efficient with is creating eBooks. I built two this year. The first one took a couple of weeks of diligent work to get it done… and then I ended up redoing the formatting because I didn’t like it. Oh, let’s be honest and call it three weeks, shall we?

But then my second eBook took just two days!

Why? Because I figured out so many things while creating the first one, and then just duplicated it for the second.

I have a third in-process now and I know that once I have the content down, the rest will be a snap!

So as you think about your own marketing… where do you have inefficiencies that you think could be simplified if you just created a process? It might be worth the effort!

Sometimes, the inefficiency is just tied to a habit you have in place.

During my latest Facebook Live, I talked about what it takes to change a habit.

While I start the video out talking about my attempts to go to bed earlier, I connect it directly to marketing. (Hint: It’s not the habit itself that you have to change.)

I invite you to check it out below: